Top: Optical flow is useful for action recognition and one can train a flow algorithm on the task of action recognition, improving its performance. Bottom: Parsing human motions using hierarchical dynamic clustering.

Much of our work focuses on capturing or estimating human movement.  For this we seek metrically accurate 3D movement with increasing levels of detail. We are interested, however, in more than the movement of the joints, the facial muscles, the fingers, etc. What we really seek is what is behind human movement; that is, the goals, motives, emotions, and plans that drive human movement.

A first step towards understanding human motion is being able to predict it. To that end, we train deep neural networks on motion capture data to generate realistic human movements. We have shown, however, that simple baselines can outperform deep learning methods (RNNs) to existing mocap datasets, with similarly unsatisfying results that tend to the mean motion. Using our MoSh method, we transform large datasets of mocap markers into a consistent body representation (SMPL). This gives us sufficient training data for deep networks to be effective.

Existing mocap data, however, is limited, making generalization hard. Human movement, however, is, to some extent governed by the physics of the world. For example, a large person and small person will do jumping jacks differently due to their mass and its distribution. To efficiently capture such variation we turn to physics-based models of human movement.

Our interest goes deeper than prediction and physics to the causes of movement. To study this we track human movement together with speech so that we can relate the intent and goals with behavior. We do this to model how speech drives facial motions and to relate human movement to scripts in movies. We do this at both the pixel level and at the level of 3D movement.

We argue that capture, modeling and synthesis of human motion produces a virtuous cycle. If we can synthesize avatars behaving realistically in virtual worlds, then we must have modeled essential elements of human behavior. If we can build human and animal avatars that have goals, can see, and can act, then we can generate an infinite amount of training data that will let us better analyze the behavior of real people. 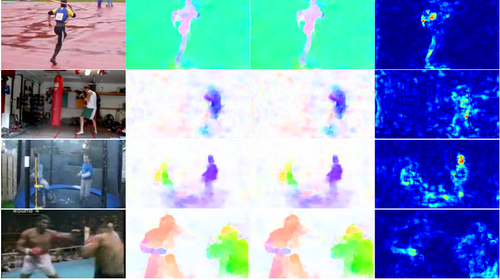 On the Integration of Optical Flow and Action Recognition 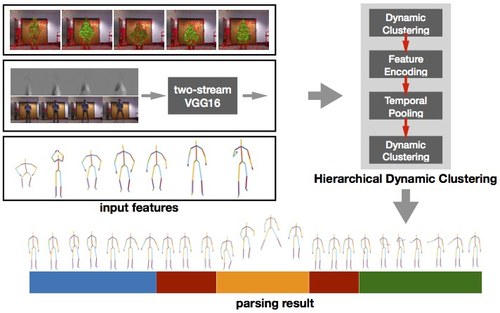 In Proceedings of the British Machine Vision Conference (BMVC), pages: 269, BMVA Press, September 2018 (inproceedings)
Abstract
Parsing continuous human motion into meaningful segments plays an essential role in various applications. In this work, we propose a hierarchical dynamic clustering framework to derive action clusters from a sequence of local features in an unsuper- vised bottom-up manner. We systematically investigate the modules in this framework and particularly propose diverse temporal pooling schemes, in order to realize accurate temporal action localization. We demonstrate our method on two motion parsing tasks: temporal action segmentation and abnormal behavior detection. The experimental results indicate that the proposed framework is significantly more effective than the other related state-of-the-art methods on several datasets. 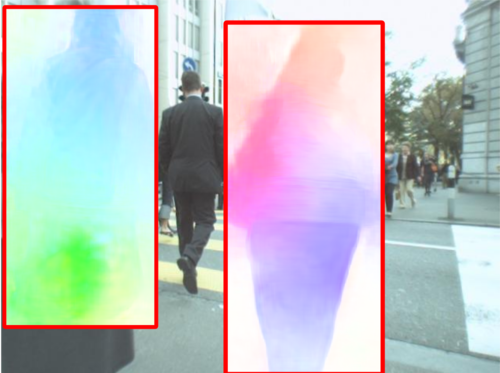 In 29th British Machine Vision Conference, September 2018 (inproceedings)
Abstract
The optical flow of humans is well known to be useful for the analysis of human action. Given this, we devise an optical flow algorithm specifically for human motion and show that it is superior to generic flow methods. Designing a method by hand is impractical, so we develop a new training database of image sequences with ground truth optical flow. For this we use a 3D model of the human body and motion capture data to synthesize realistic flow fields. We then train a convolutional neural network to estimate human flow fields from pairs of images. Since many applications in human motion analysis depend on speed, and we anticipate mobile applications, we base our method on SpyNet with several modifications. We demonstrate that our trained network is more accurate than a wide range of top methods on held-out test data and that it generalizes well to real image sequences. When combined with a person detector/tracker, the approach provides a full solution to the problem of 2D human flow estimation. Both the code and the dataset are available for research. 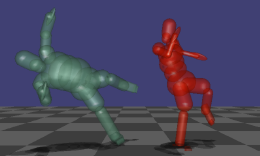 Computer Graphics Forum, 37, pages: 6:1-12, July 2018 (article)
Abstract
Motion capture is often retargeted to new, and sometimes drastically different, characters. When the characters take on realistic human shapes, however, we become more sensitive to the motion looking right. This means adapting it to be consistent with the physical constraints imposed by different body shapes. We show how to take realistic 3D human shapes, approximate them using a simplified representation, and animate them so that they move realistically using physically-based retargeting. We develop a novel spacetime optimization approach that learns and robustly adapts physical controllers to new bodies and constraints. The approach automatically adapts the motion of the mocap subject to the body shape of a target subject. This motion respects the physical properties of the new body and every body shape results in a different and appropriate movement. This makes it easy to create a varied set of motions from a single mocap sequence by simply varying the characters. In an interactive environment, successful retargeting requires adapting the motion to unexpected external forces. We achieve robustness to such forces using a novel LQR-tree formulation. We show that the simulated motions look appropriate to each character’s anatomy and their actions are robust to perturbations. 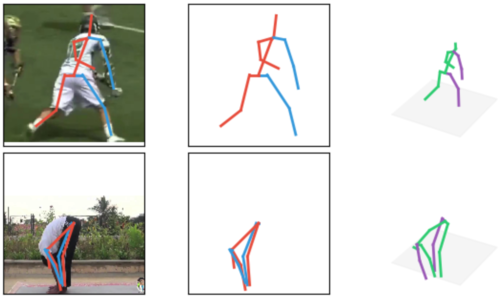 A simple yet effective baseline for 3d human pose estimation

In Proceedings IEEE International Conference on Computer Vision (ICCV), IEEE, Piscataway, NJ, USA, October 2017 (inproceedings)
Abstract
Following the success of deep convolutional networks, state-of-the-art methods for 3d human pose estimation have focused on deep end-to-end systems that predict 3d joint locations given raw image pixels. Despite their excellent performance, it is often not easy to understand whether their remaining error stems from a limited 2d pose (visual) understanding, or from a failure to map 2d poses into 3-dimensional positions. With the goal of understanding these sources of error, we set out to build a system that given 2d joint locations predicts 3d positions. Much to our surprise, we have found that, with current technology, "lifting" ground truth 2d joint locations to 3d space is a task that can be solved with a remarkably low error rate: a relatively simple deep feed-forward network outperforms the best reported result by about 30\% on Human3.6M, the largest publicly available 3d pose estimation benchmark. Furthermore, training our system on the output of an off-the-shelf state-of-the-art 2d detector (\ie, using images as input) yields state of the art results -- this includes an array of systems that have been trained end-to-end specifically for this task. Our results indicate that a large portion of the error of modern deep 3d pose estimation systems stems from their visual analysis, and suggests directions to further advance the state of the art in 3d human pose estimation. 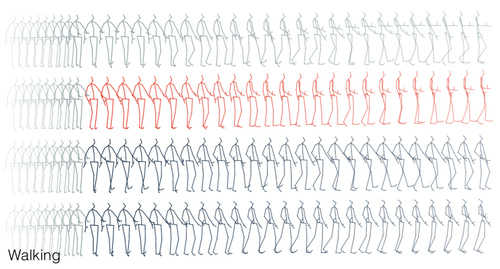 In Proceedings IEEE Conference on Computer Vision and Pattern Recognition (CVPR) 2017, IEEE, Piscataway, NJ, USA, July 2017 (inproceedings)
Abstract
Human motion modelling is a classical problem at the intersection of graphics and computer vision, with applications spanning human-computer interaction, motion synthesis, and motion prediction for virtual and augmented reality. Following the success of deep learning methods in several computer vision tasks, recent work has focused on using deep recurrent neural networks (RNNs) to model human motion, with the goal of learning time-dependent representations that perform tasks such as short-term motion prediction and long-term human motion synthesis. We examine recent work, with a focus on the evaluation methodologies commonly used in the literature, and show that, surprisingly, state-of-the-art performance can be achieved by a simple baseline that does not attempt to model motion at all. We investigate this result, and analyze recent RNN methods by looking at the architectures, loss functions, and training procedures used in state-of-the-art approaches. We propose three changes to the standard RNN models typically used for human motion, which result in a simple and scalable RNN architecture that obtains state-of-the-art performance on human motion prediction. 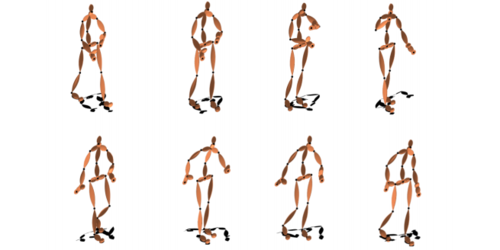 In Proceedings IEEE Conference on Computer Vision and Pattern Recognition (CVPR) 2017, IEEE, Piscataway, NJ, USA, July 2017 (inproceedings)
Abstract
Generative models of 3D human motion are often restricted to a small number of activities and can therefore not generalize well to novel movements or applications. In this work we propose a deep learning framework for human motion capture data that learns a generic representation from a large corpus of motion capture data and generalizes well to new, unseen, motions. Using an encoding-decoding network that learns to predict future 3D poses from the most recent past, we extract a feature representation of human motion. Most work on deep learning for sequence prediction focuses on video and speech. Since skeletal data has a different structure, we present and evaluate different network architectures that make different assumptions about time dependencies and limb correlations. To quantify the learned features, we use the output of different layers for action classification and visualize the receptive fields of the network units. Our method outperforms the recent state of the art in skeletal motion prediction even though these use action specific training data. Our results show that deep feedforward networks, trained from a generic mocap database, can successfully be used for feature extraction from human motion data and that this representation can be used as a foundation for classification and prediction. 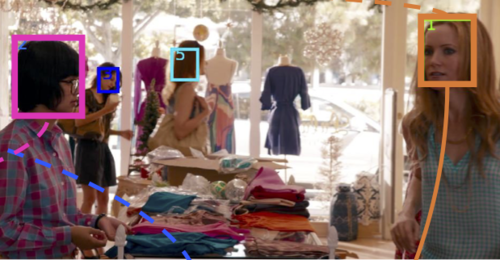