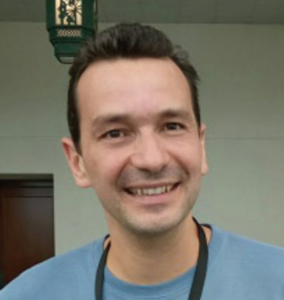 I will present three recent projects within the 3D Deep Learning research line from my team at Google Research: (1) a deep network for reconstructing the 3D shape of multiple objects appearing in a single RGB image (ECCV'20). (2) a new conditioning scheme for normalizing flow models. It enables several applications such as reconstructing an object's 3D point cloud from an image, or the converse problem of rendering an image given a 3D point cloud, both within the same modeling framework (CVPR'20); (3) a neural rendering framework that maps a voxelized object into a high quality image. It renders highly-textured objects and illumination effects such as reflections and shadows realistically. It allows controllable rendering: geometric and appearance modifications in the input are accurately represented in the final rendering (CVPR'20).

Biography: Vittorio Ferrari is a Senior Staff Research Scientist at Google, where he leads a research group on visual learning. He received his PhD from ETH Zurich in 2004, then was a post-doc at INRIA Grenoble (2006-2007) and at the University of Oxford (2007-2008). Between 2008 and 2012 he was an Assistant Professor at ETH Zurich, funded by a Swiss National Science Foundation Professorship grant. In 2012-2018 he was faculty at the University of Edinburgh, where he became a Full Professor in 2016 (now he is a Honorary Professor). In 2012 he received the prestigious ERC Starting Grant, and the best paper award from the European Conference in Computer Vision. He is the author of over 120 technical publications. He regularly serves as an Area Chair for the major computer vision conferences, he was a Program Chair for ECCV 2018 and is a General Chair for ECCV 2020. He is an Associate Editor of IEEE Pattern Analysis and Machine Intelligence. His current research interests are in learning visual models with minimal human supervision, human-machine collaboration, and 3D Deep Learning.