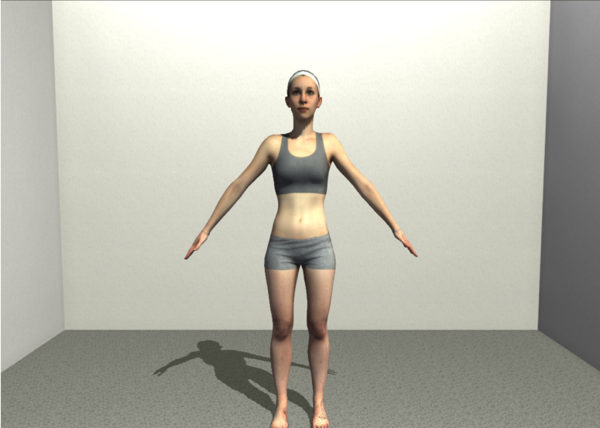 How do we perceive our own body weight? Which body weight do we find attractive?

An interdisciplinary team of scientists from the Max Planck Institute for Biological Cybernetics, the University of Tübingen and the Max Planck Institute for Intelligent Systems place test persons in front of their virtual selves and examine their self-perception. The aim of the studies is to investigate how accurately healthy women and men, incl. patients with anorexia nervosa, perceive their own body weight. The findings provide insights for new therapy approaches for people with eating disorders.

Tübingen - In a joint research project, scientists from the Max Planck Institute for Biological Cybernetics, the University of Tübingen and the Max Planck Institute for Intelligent Systems investigated how men and women perceive their body weight. Participants spanning all body weight categories were tested – from underweight and patients with anorexia nervosa, to overweight and obesity. Most of the participants suffering from anorexia nervosa were in treatment because of their eating disorder at the time of the experiment.

Researchers Anne Thaler and Simone Mölbert et al. placed more than 100 volunteers in a body scanner and created a virtual avatar that could realistically be adjusted thinner and fatter. To test how people perceive their bodies, the researchers used virtual reality (VR) technology and presented each participant with their life-size virtual self on a screen. While the participants were facing their replica, they were given a joypad (similar to the controller of a Playstation) and were asked to adjust the avatar’s body weight until it matched their own actual weight. The aim was to investigate how participants perceive themselves: Do women and men perceive their bodies accurately? This question is particularly important for the therapy of eating disorders, that are so far characterized by an “over-evaluation” of own body appearance.

So far, many previous studies suggest that anorexic women suffer from a distorted visual self-perception and perceive themselves as too fat, although they are generally severely underweight. "We have not found any evidence of this," says Katrin Giel, Head of the Research Group Psychobiology of Eating Behavior at the Department of Psychosomatic Medicine and Psychotherapy from the University of Tübingen. "It was rather the case that slimmer women and patients with anorexia nervosa slightly underestimated their virtual body weight. However, the deviations from normal weight test subjects were very small.”

The researchers also investigated which body weight participants considered desirable. Here, the results differed between men, healthy women, and patients with anorexia nervosa: Males of normal weight chose a desired body weight that was similar to their actual body weight. This however does not mean they are satisfied with their bodies, but rather that other factors such as muscularity or height might be more relevant to them than weight alone. In contrast, females of normal weight desired a slightly more slender healthy weight. However – and this is crucial – women with anorexia nervosa considered severely underweight bodies as ideal.

The researchers therefore concluded that women with anorexia nervosa have a different opinion than women with normal weight about what an "attractive" body looks like: for example, they perceive a weight of 43 kg at a height of 1.60 m as beautiful. A woman in the healthy weight range would tend to disagree; this weight would be far too low for her. Researcher Simone Mölbert who worked closely with eating-disorder patients treated at the University Hospital in Tübingen during her interdisciplinary PhD project, explains: “We found that women with anorexia nervosa are well aware of their appearance. We did not find any difference to healthy women in how well they can identify their weight. What we did find, was a very clear general preference for severely underweight bodies in the patient population.” The fact that women with anorexia nervosa have a different opinion about what weight is desirable, and not a distorted visual self-perception, should thus come to the fore in future therapies for people suffering from eating disorders, the researchers hope.

The use of virtual reality in research on body size perception has only started to be more prevalent in recent years. To test how people perceive their own body dimensions, previous methods have often taken pictures of the participants and manipulated the pictures by stretching or compressing them in an attempt to simulate body weight variations. Participants were then asked to select the image that they think shows their real body weight. This approach is problematic as it results in unrealistic body deformations that do not reflect real-life weight changes and the task could therefore be solved by identifying stretched or compressed images without necessarily assessing the perception of one’s own body.

The new approach uses state-of-the-art computer vision techniques that allow to create 3D virtual bodies that are either based on a body scan of a participant and thus look exactly like the person, or are based on the average body of a few thousand body scans, in combination with statistically probably variations of the bodies in terms of weight. Anne Thaler explains: “To test how people perceive their bodies, we used virtual reality technology because it allows us to create scenarios that mimic real-life situations, such as standing in front of a body or seeing one’s own body in a mirror in life-size.” This approach is much closer to real-life than previous studies that had people estimate their body sizes e.g. by verbally instructing the experimenter to adjust a measure tape.

This multi-disciplinary research project is a shining example of how excellent scientists in Computer Science, Philosophy, Clinical and Cognitive Psychology combined their efforts for making a significant impact on fundamental and clinical research, by using advancements in technology for the greater good. The Werner Reichardt Center for Integrative Neuroscience (CIN) at the University of Tübingen supported the collaboration projects between the Department of Psychosomatic Medicine and Psychotherapy at the University Hospital of Tübingen, the Minerva Group Space and Body Perception at the Max Planck Institute for Biological Cybernetics, the CIN Research Group “Philosophy of Neuroscience” and the Department of Perceiving Systems at the Max Planck Institute for Intelligent Systems.

Simone Mölbert is working at the Medical University Hospital Tübingen, in the Department of Psychosomatic Medicine and Psychotherapy. In her interdisciplinary PhD project, she uses virtual reality and biometric avatars to investigate body perception in different patient populations. Specifically, she works with patients suffering from anorexia nervosa. She works closely with the Max Planck Institute for Biological Cybernetics and the Max Planck Institute for Intelligent Systems.

Anne Thaler is a PhD student at the Max Planck Institute for Biological Cybernetics and affiliated with the Max Planck Institute for Intelligent Systems. In her PhD project, she looks at the role of different visual and non-visual factors in body perception in healthy people, e.g. the influence of body identity (self vs others) and perspective on the body (1st vs 3rd person) on estimates of body dimensions. For her research, she uses biometric avatars and state-of-the art virtual reality.

Dr. Michael Black is one of the founding directors at the Max Planck Institute for Intelligent Systems in Tübingen, Germany, where he leads the Perceiving Systems department and serves as Managing Director. He is also a Distinguished Amazon Scholar, an honorary Professor at the University of Tübingen, and Adjunct Professor at Brown University, Rhode Island. His work has won several awards including the IEEE Computer Society Outstanding Paper Award (1991), Honorable Mention for the Marr Prize (1999 and 2005), the 2010 Koenderink Prize for Fundamental Contributions in Computer Vision, and the 2013 Helmholtz Prize for work that has stood the test of time. He is a foreign member of the Royal Swedish Academy of Sciences. In 2013 he co-founded Body Labs Inc., which was acquired by Amazon in 2017.

Prof. Dr. Katrin Giel is the Head of the Research Group Psychobiology of Eating Behavior at the Department of Psychosomatic Medicine and Psychotherapy from the University of Tübingen. Her group is interested in psychobiological mechanisms in the regulation of eating behavior, especially the framework of impulsivity, including concepts such as reward sensitivity, inhibitory control and emotion regulation. They are studying these mechanisms across the whole spectrum of body weight, especially in extreme weight conditions such as underweight, as it is seen in the eating disorder anorexia nervosa, and overweight/obesity. They are aiming at a translation research approach by using results from experimental studies as a basis for the development of novel and innovative treatment/training approaches for eating and weight disorders. A second focus of their work is on body image, also especially in extreme weight conditions, and how this can be assessed with novel techniques, e.g. using virtual reality applications.