Optical flow in the LGN 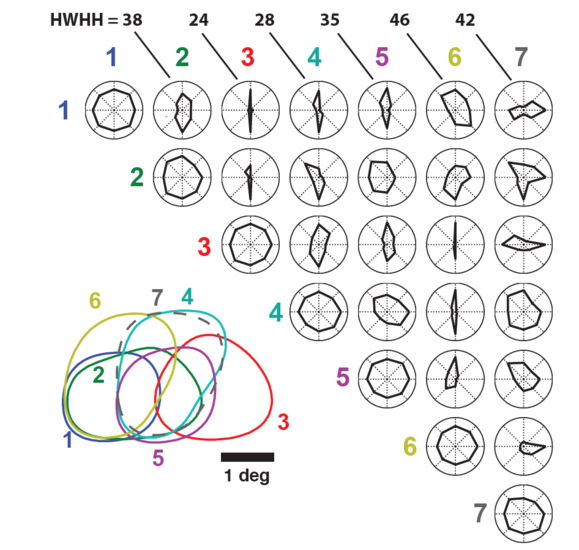 Geniculate neuron pairs exhibit a diverse range of tuning properties. Shown in the lower left are the contours of the spatial receptive fields of 7 geniculate neurons recorded simultaneously, each represented by a different color and number. ON cells are represented by solid lines, OFF cells by dashed. The upper triangle shows the array of tuning properties for all pair-wise combinations of cells. Half-width-half-height (HWHH) values in degrees are given for the polar plots in the top row.

As we move through our visual environment, the spatial and temporal pattern of light that enters our eyes is strongly influenced by the properties of objects within the environment, their motion relative to each other, and our own motion relative to the external world. From the perspective of the computer vision community, an important challenge exists in inferring the motion of the external environment (or “optical flow”) from sequences of 2D images. From the perspective of the neuroscience community, quantifying the distributed neural representation of motion in the early visual pathway is a critical step in understanding how information concerning motion is extracted and prepared for processing in higher visual centers. This interdisciplinary collaborative project synthesizes these two distinct problems with tightly integrated aims designed to serve both efforts.

This project explores the estimation of visual motion by biological and computational systems in response to complex natural image sequences. Through this work we are developing a rich set of methods for the representation and recovery of motion boundaries and optical flow by brains and machines. Our computational and biological models are unified through a common probabilistic framework and a unique dataset of spatiotemporal naturalistic scenes in which we simultaneously know the optical flow at each image pixel and neural activity of a large population of single neurons densely sampled from the visual thalamus.

Natural visual stimuli have highly structured spatial and temporal properties, which strongly shape the activity of neurons in the early visual pathway. In response to natural scenes, neurons in the LGN are temporally precise on a time scale of 10-20 ms both within single cells and across cells within a population. Given that thalamic neurons with overlapping receptive fields are likely to converge at common cortical targets, that the thalamocortical synapse is highly sensitive to the timing of thalamic inputs on a time scale of approximately 10 ms, and that cortical neurons can be reliably driven with a small number of thalamic inputs, we posit a potential role for the synchronous activity of thalamic input in the establishment of cortical response properties.

Input from thalamic neurons with large spatial separation (i.e. > 2 receptive field centers) could naturally provide a highly selective signal for orientation, but given their receptive field separation, they are unlikely to project to a common recipient cortical neuron or even a common orientation column, creating a paradox in the emergence of important kinds of selectivity in visual cortex.

We have shown that, that the synchronous firing of geniculate cell pairs with highly overlapped receptive fields is strongly selective for orientation even though individual LGN neurons are not. This is made possibly due to the asymmetry in the fine temporal precision of geniculate responses. Neurons with highly overlapped receptive fields and similar response latencies can generate direction selectivity in a cortical target that reads out the synchronous inputs. We show that this stimulus selectivity remains unchanged under different contrasts, stimulus velocities and temporal integration windows.

Our findings suggest a novel population code in the synchronous firing of neurons in the early visual pathway that could serve as the substrate for establishing cortical representations of the visual scene. Thalamic synchrony could play a role in the nonlinear relationship between cortical membrane potential and cortical firing rate. This suggests an extremely simple conceptual model of the constituent elements of the cortical representation of the visual scene that relies only on the intrinsic spatial and temporal diversity of a highly localized thalamic population, and provides support for a feedforward model of thalamocortical processing that incorporates the physiological role of thalamic timing/synchrony in shaping cortical response properties

In European Conf. on Computer Vision (ECCV), pages: 611-625, Part IV, LNCS 7577, (Editors: A. Fitzgibbon et al. (Eds.)), Springer-Verlag, October 2012 (inproceedings)
Abstract
Ground truth optical flow is difficult to measure in real scenes with natural motion. As a result, optical flow data sets are restricted in terms of size, complexity, and diversity, making optical flow algorithms difficult to train and test on realistic data. We introduce a new optical flow data set derived from the open source 3D animated short film Sintel. This data set has important features not present in the popular Middlebury flow evaluation: long sequences, large motions, specular reflections, motion blur, defocus blur, and atmospheric effects. Because the graphics data that generated the movie is open source, we are able to render scenes under conditions of varying complexity to evaluate where existing flow algorithms fail. We evaluate several recent optical flow algorithms and find that current highly-ranked methods on the Middlebury evaluation have difficulty with this more complex data set suggesting further research on optical flow estimation is needed. To validate the use of synthetic data, we compare the image- and flow-statistics of Sintel to those of real films and videos and show that they are similar. The data set, metrics, and evaluation website are publicly available.

Journal of Neuroscience, 32(26):9073-9088, June 2012 (article)
Abstract
Thalamic neurons respond to visual scenes by generating synchronous spike trains on the timescale of 10–20 ms that are very effective at driving cortical targets. Here we demonstrate that this synchronous activity contains unexpectedly rich information about fundamental properties of visual stimuli. We report that the occurrence of synchronous firing of cat thalamic cells with highly overlapping receptive fields is strongly sensitive to the orientation and the direction of motion of the visual stimulus. We show that this stimulus selectivity is robust, remaining relatively unchanged under different contrasts and temporal frequencies (stimulus velocities). A computational analysis based on an integrate-and-fire model of the direct thalamic input to a layer 4 cortical cell reveals a strong correlation between the degree of thalamic synchrony and the nonlinear relationship between cortical membrane potential and the resultant firing rate. Together, these findings suggest a novel population code in the synchronous firing of neurons in the early visual pathway that could serve as the substrate for establishing cortical representations of the visual scene.