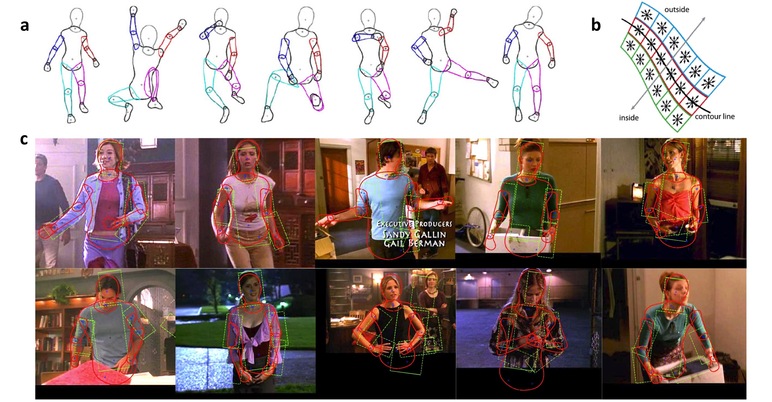 a. Examples of the DS model in a variety of poses. Note how much the model’s left calf (magenta) varies in shape. b. Contour likelihood. The image shows the location of the HOG cells along a limb contour. Cells are located on the boundary, just inside, and just outside. c. Estimated body pose – examples where the DS model improves on the PS baseline. DS is solid red, PS is dashed green.

We address the problem of estimating the pose of people in images and video using a new deformable 2D model of the human body.

The prevailing approach to this problem uses Pictorial Structures (PS) models, which define a probabilistic model of 2D articulated objects in images. Typical PS models assume an object can be represented by a set of rigid parts connected with pairwise constraints that define the prior probability of part configurations. Such 2D models cannot capture how the shape of 3D articulated objects varies with pose when projected into the image.  To address this, PS parts are sometimes augmented with an additional scale parameter to account for foreshortening, but typically this scale parameter is not correlated with the pose prior.

Additionally, these models are widely used to represent non-rigid articulated objects such as humans and animals despite the fact that such objects have parts that deform non-rigidly.  While PS models are often called deformable, the deformation is in terms of the relative spatial arrangement of the parts. In general, however, the parts of natural articulated objects vary in shape as a function of their spatial arrangement. For example, rotation of a human upper arm causes changes in shoulder shape.

To address this, we define a new Deformable Structures (DS) model that is a natural extension of previous PS models and that captures the non-rigid shape deformation of the parts. DS shares with PS a simliar parameterization but, instead of using fixed templates for the parts, each part in a DS model is represented by a low-dimensional shape deformation space. Pairwise potentials capture how a part's shape varies with relative pose and the shape of the neighboring parts.

This model is learned from a detailed 3D graphics model of the human body. This allows us to generate training data of arbitrary poses for arbitrary camera locations by projecting the model contours and joint locations into the 2D image.  Using Principal Component Analysis, we learn the DS model from random poses and for random cameras using an approximately frontal view, but models for other poses or scenarios can also be learned. Currently our DS models are learned from a single 3D human body shape but future work should address models of people of varying shape.

A key advantage of the DS model is that it more accurately models object boundaries. This enables contour-based and region-based image likelihood models that are more discriminative than previous PS likelihoods.  We learn likelihood models using training imagery annotated using a DS “puppet.” With this puppet we define a novel annotation tool for the web annotation of human pose in images and videos.  Since body shape is made explicit in the prior, the likelihood does not need to represent how image appearance varies with shape.  This simplifies the job of the likelihood term.

The part-based structure of the DS model allows us to infer human poses in images using a form of non-parametric belief propagation.  We evaluate performance in 2D human pose estimation on the Buffy the Vampire Slayer data set. Finally, while we develop the model in the context of 2D human body pose and shape, the model itself is fully general and can be used to represent other articulated objects with non-rigidly deforming parts.

1. The DS model is a “naked” puppet, and future extensions of the model can go in the direction of learning a generative model with richer appearance: a probabilistic model for the contour location expressing the uncertainty over the type of clothing and hairstyle can be exploited in methods that couple pose estimation with image segmentation.

2. We do not explicitly distinguish in the model between deformations due to pose and deformations due to camera variations. Adding to the model a parametrization for the camera location could be an interesting future direction for modeling shape changes in video sequences with moving camera.

3. In many applications one would like to estimate 3D pose from 2D. The correlation between 2D pose and shape and 3D pose can be learned from the DS training set since 3D pose information is already available from the training samples generated from the 3D model projection. 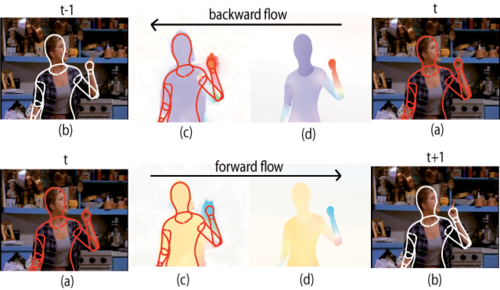 In IEEE International Conference on Computer Vision (ICCV), pages: 3312-3319, 2013 (inproceedings)
Abstract
We address the problem of upper-body human pose estimation in uncontrolled monocular video sequences, without manual initialization. Most current methods focus on isolated video frames and often fail to correctly localize arms and hands. Inferring pose over a video sequence is advantageous because poses of people in adjacent frames exhibit properties of smooth variation due to the nature of human and camera motion. To exploit this, previous methods have used prior knowledge about distinctive actions or generic temporal priors combined with static image likelihoods to track people in motion. Here we take a different approach based on a simple observation: Information about how a person moves from frame to frame is present in the optical flow field. We develop an approach for tracking articulated motions that "links" articulated shape models of people in adjacent frames trough the dense optical flow. Key to this approach is a 2D shape model of the body that we use to compute how the body moves over time. The resulting "flowing puppets" provide a way of integrating image evidence across frames to improve pose inference. We apply our method on a challenging dataset of TV video sequences and show state-of-the-art performance. 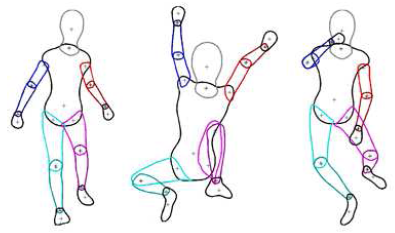 From pictorial structures to deformable structures

In IEEE Conf. on Computer Vision and Pattern Recognition (CVPR), pages: 3546-3553, IEEE, June 2012 (inproceedings)
Abstract
Pictorial Structures (PS) define a probabilistic model of 2D articulated objects in images. Typical PS models assume an object can be represented by a set of rigid parts connected with pairwise constraints that define the prior probability of part configurations. These models are widely used to represent non-rigid articulated objects such as humans and animals despite the fact that such objects have parts that deform non-rigidly. Here we define a new Deformable Structures (DS) model that is a natural extension of previous PS models and that captures the non-rigid shape deformation of the parts. Each part in a DS model is represented by a low-dimensional shape deformation space and pairwise potentials between parts capture how the shape varies with pose and the shape of neighboring parts. A key advantage of such a model is that it more accurately models object boundaries. This enables image likelihood models that are more discriminative than previous PS likelihoods. This likelihood is learned using training imagery annotated using a DS “puppet.” We focus on a human DS model learned from 2D projections of a realistic 3D human body model and use it to infer human poses in images using a form of non-parametric belief propagation. 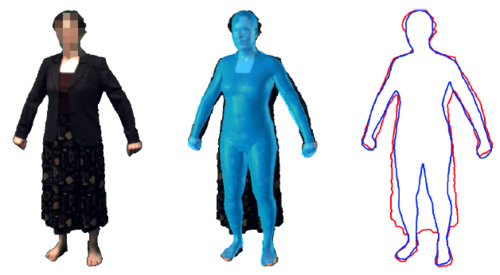 In European Conf. on Computer Vision, (ECCV), pages: 285-298, Springer-Verlag, September 2010 (inproceedings)
Abstract
Detection, tracking, segmentation and pose estimation of people in monocular images are widely studied. Two-dimensional models of the human body are extensively used, however, they are typically fairly crude, representing the body either as a rough outline or in terms of articulated geometric primitives. We describe a new 2D model of the human body contour that combines an underlying naked body with a low-dimensional clothing model. The naked body is represented as a Contour Person that can take on a wide variety of poses and body shapes. Clothing is represented as a deformation from the underlying body contour. This deformation is learned from training examples using principal component analysis to produce eigen clothing. We find that the statistics of clothing deformations are skewed and we model the a priori probability of these deformations using a Beta distribution. The resulting generative model captures realistic human forms in monocular images and is used to infer 2D body shape and pose under clothing. We also use the coefficients of the eigen clothing to recognize different categories of clothing on dressed people. The method is evaluated quantitatively on synthetic and real images and achieves better accuracy than previous methods for estimating body shape under clothing. 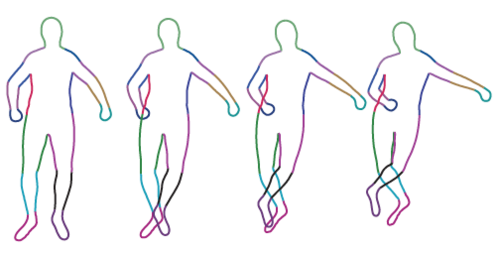 In IEEE Conf. on Computer Vision and Pattern Recognition, (CVPR), pages: 639-646, IEEE, June 2010 (inproceedings)
Abstract
We define a new “contour person” model of the human body that has the expressive power of a detailed 3D model and the computational benefits of a simple 2D part-based model. The contour person (CP) model is learned from a 3D SCAPE model of the human body that captures natural shape and pose variations; the projected contours of this model, along with their segmentation into parts forms the training set. The CP model factors deformations of the body into three components: shape variation, viewpoint change and part rotation. This latter model also incorporates a learned non-rigid deformation model. The result is a 2D articulated model that is compact to represent, simple to compute with and more expressive than previous models. We demonstrate the value of such a model in 2D pose estimation and segmentation. Given an initial pose from a standard pictorial-structures method, we refine the pose and shape using an objective function that segments the scene into foreground and background regions. The result is a parametric, human-specific, image segmentation.