Our focus is on vision-based perception in multi-robot systems. Our goal is to understand how teams of robots, especially flying robots, can act (navigate, cooperate and communicate) in optimal ways using only raw sensor inputs, e.g., RGB images and IMU measurements. Thus, we are studying novel methods for active perception, sensor fusion and state estimation in multi-robot systems. To facilitate our research we also design and develop novel robot platforms.

Multi-robot Active Perception -- We investigate methods for multi-robot formation control based on cooperative target perception without relying on a pre-specified formation geometry. We have developed methods for teams of mobile aerial and ground robots, equipped with only RGB cameras, to maximize their joint perception of moving persons [ ] [ ] or objects in 3D space by actively steering the formations that facilitate the joint perception. We have introduced and rigorously tested active perception methods using novel detection and tracking pipelines [ ] and nonlinear model predictive control (MPC) based formation controller [ ] [ ], which forms our autonomous aerial motion capture (AirCap) system's front-end (AirCap Front-End).

Multi-robot Sensor Fusion -- We study and develop unified methods for sensor fusion that are not only scalable to large environments but also simultaneously to a large number of sensors and teams of robots [ ]. We have developed several methods for unified and integrated multi-robot cooperative localization and target tracking. Here "unified" means that the poses of all robots and targets are estimated by every other robot and "integrated" means that disagreement among sensors, inconsistent sensor measurements, occlusions and sensor failures, are handled within a single Bayesian framework. The methods are either filter-based (filtering) [ ] or pose-graph optimization-based approaches (smoothing). While each category has its own advantages w.r.t. the available computational resources and the level of estimation accuracy, we have also developed a novel moving-horizon technique [ ] for a hybrid method that combines the advantages of both kinds of approaches.

New Robot Platforms -- In order to have extensive access to the hardware, we design and build most of our robotic platforms. Currently, our main flying platforms include 8-rotor Octocopters. More details can be found here https://ps.is.tue.mpg.de/pages/outdoor-aerial-motion-capture-system.

There are currently two ongoing AirCap projects in our group: 3D Motion Capture and Perception-Based Control 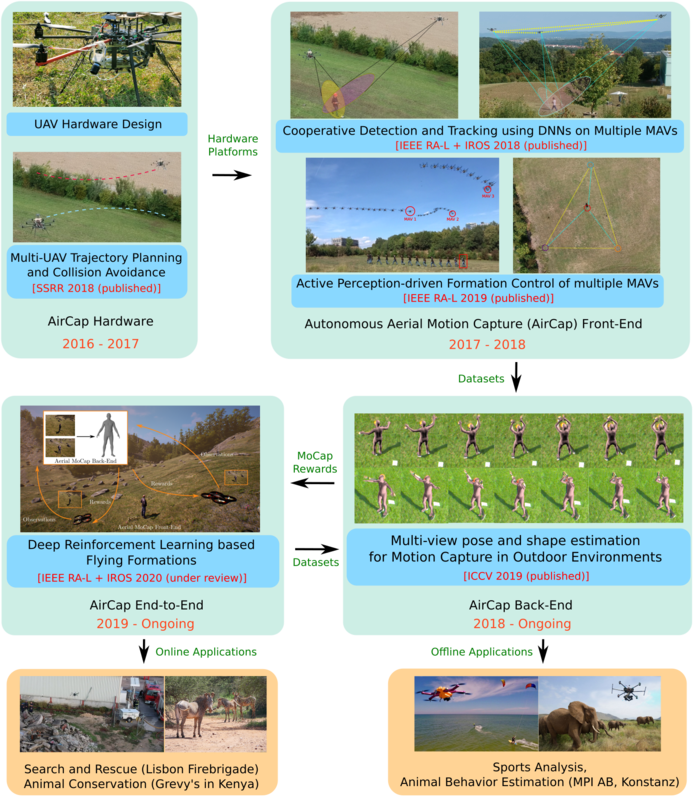 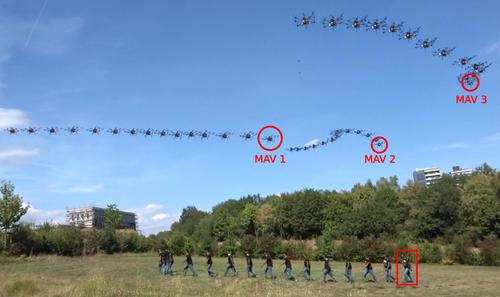 IEEE/RSJ International Conference on Intelligent Robots and Systems (IROS 2019), Workshop on Aerial Swarms, November 2019 (misc)
Abstract
This paper presents an overview of the Grassroots project Aerial Outdoor Motion Capture (AirCap) running at the Max Planck Institute for Intelligent Systems. AirCap's goal is to achieve markerless, unconstrained, human motion capture (mocap) in unknown and unstructured outdoor environments. To that end, we have developed an autonomous flying motion capture system using a team of aerial vehicles (MAVs) with only on-board, monocular RGB cameras. We have conducted several real robot experiments involving up to 3 aerial vehicles autonomously tracking and following a person in several challenging scenarios using our approach of active cooperative perception developed in AirCap. Using the images captured by these robots during the experiments, we have demonstrated a successful offline body pose and shape estimation with sufficiently high accuracy. Overall, we have demonstrated the first fully autonomous flying motion capture system involving multiple robots for outdoor scenarios. 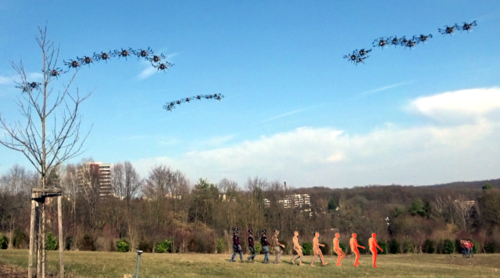 In International Conference on Computer Vision, October 2019 (inproceedings) Accepted
Abstract
Capturing human motion in natural scenarios means moving motion capture out of the lab and into the wild. Typical approaches rely on fixed, calibrated, cameras and reflective markers on the body, significantly limiting the motions that can be captured. To make motion capture truly unconstrained, we describe the first fully autonomous outdoor capture system based on flying vehicles. We use multiple micro-aerial-vehicles(MAVs), each equipped with a monocular RGB camera, an IMU, and a GPS receiver module. These detect the person, optimize their position, and localize themselves approximately. We then develop a markerless motion capture method that is suitable for this challenging scenario with a distant subject, viewed from above, with approximately calibrated and moving cameras. We combine multiple state-of-the-art 2D joint detectors with a 3D human body model and a powerful prior on human pose. We jointly optimize for 3D body pose and camera pose to robustly fit the 2D measurements. To our knowledge, this is the first successful demonstration of outdoor, full-body, markerless motion capture from autonomous flying vehicles. 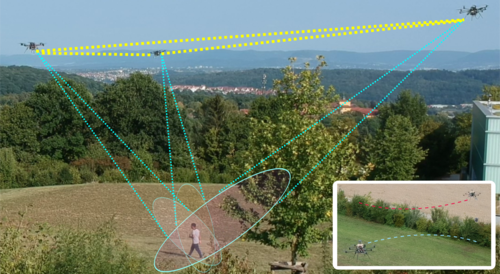 IEEE Robotics and Automation Letters, Robotics and Automation Letters, 4(4):4491-4498, IEEE, October 2019 (article)
Abstract
We present a novel robotic front-end for autonomous aerial motion-capture (mocap) in outdoor environments. In previous work, we presented an approach for cooperative detection and tracking (CDT) of a subject using multiple micro-aerial vehicles (MAVs). However, it did not ensure optimal view-point configurations of the MAVs to minimize the uncertainty in the person's cooperatively tracked 3D position estimate. In this article, we introduce an active approach for CDT. In contrast to cooperatively tracking only the 3D positions of the person, the MAVs can actively compute optimal local motion plans, resulting in optimal view-point configurations, which minimize the uncertainty in the tracked estimate. We achieve this by decoupling the goal of active tracking into a quadratic objective and non-convex constraints corresponding to angular configurations of the MAVs w.r.t. the person. We derive this decoupling using Gaussian observation model assumptions within the CDT algorithm. We preserve convexity in optimization by embedding all the non-convex constraints, including those for dynamic obstacle avoidance, as external control inputs in the MPC dynamics. Multiple real robot experiments and comparisons involving 3 MAVs in several challenging scenarios are presented. 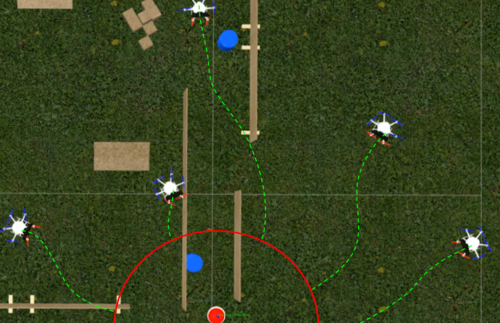 2018 IEEE International Symposium on Safety, Security, and Rescue Robotics (SSRR), pages: 1-8, IEEE, August 2018 (conference)
Abstract
In this work, we consider the problem of decentralized multi-robot target tracking and obstacle avoidance in dynamic environments. Each robot executes a local motion planning algorithm which is based on model predictive control (MPC). The planner is designed as a quadratic program, subject to constraints on robot dynamics and obstacle avoidance. Repulsive potential field functions are employed to avoid obstacles. The novelty of our approach lies in embedding these non-linear potential field functions as constraints within a convex optimization framework. Our method convexifies nonconvex constraints and dependencies, by replacing them as pre-computed external input forces in robot dynamics. The proposed algorithm additionally incorporates different methods to avoid field local minima problems associated with using potential field functions in planning. The motion planner does not enforce predefined trajectories or any formation geometry on the robots and is a comprehensive solution for cooperative obstacle avoidance in the context of multi-robot target tracking. We perform simulation studies for different scenarios to showcase the convergence and efficacy of the proposed algorithm. 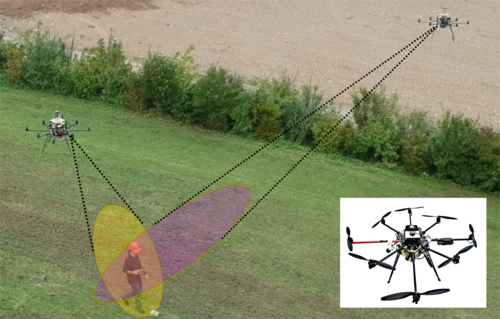 IEEE Robotics and Automation Letters, Robotics and Automation Letters, 3(4):3193-3200, IEEE, October 2018, Also accepted and presented in the 2018 IEEE/RSJ International Conference on Intelligent Robots and Systems (IROS). (article)
Abstract
Multi-camera tracking of humans and animals in outdoor environments is a relevant and challenging problem. Our approach to it involves a team of cooperating micro aerial vehicles (MAVs) with on-board cameras only. DNNs often fail at objects with small scale or far away from the camera, which are typical characteristics of a scenario with aerial robots. Thus, the core problem addressed in this paper is how to achieve on-board, online, continuous and accurate vision-based detections using DNNs for visual person tracking through MAVs. Our solution leverages cooperation among multiple MAVs and active selection of most informative regions of image. We demonstrate the efficiency of our approach through simulations with up to 16 robots and real robot experiments involving two aerial robots tracking a person, while maintaining an active perception-driven formation. ROS-based source code is provided for the benefit of the community. 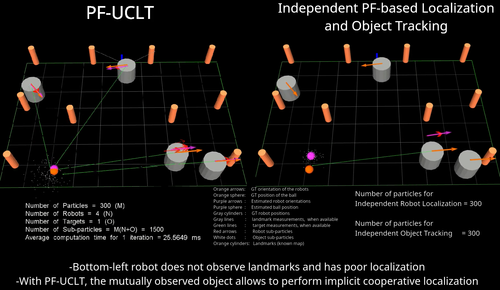 IEEE Transactions on Robotics (T-RO), 33, pages: 1184 - 1199, October 2017 (article)
Abstract
In this article we present a unified approach for multi-robot cooperative simultaneous localization and object tracking based on particle filters. Our approach is scalable with respect to the number of robots in the team. We introduce a method that reduces, from an exponential to a linear growth, the space and computation time requirements with respect to the number of robots in order to maintain a given level of accuracy in the full state estimation. Our method requires no increase in the number of particles with respect to the number of robots. However, in our method each particle represents a full state hypothesis, leading to the linear dependency on the number of robots of both space and time complexity. The derivation of the algorithm implementing our approach from a standard particle filter algorithm and its complexity analysis are presented. Through an extensive set of simulation experiments on a large number of randomized datasets, we demonstrate the correctness and efficacy of our approach. Through real robot experiments on a standardized open dataset of a team of four soccer playing robots tracking a ball, we evaluate our method's estimation accuracy with respect to the ground truth values. Through comparisons with other methods based on i) nonlinear least squares minimization and ii) joint extended Kalman filter, we further highlight our method's advantages. Finally, we also present a robustness test for our approach by evaluating it under scenarios of communication and vision failure in teammate robots. 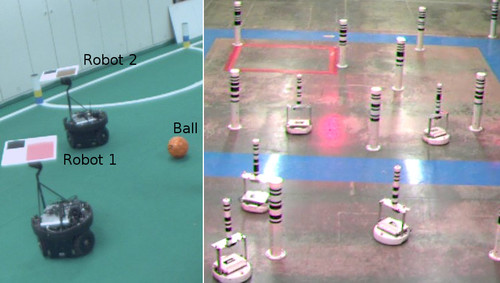 Robotics and Autonomous Systems, 83, pages: 275-286, 2016 (article)
Abstract
In this article we present an online estimator for multirobot cooperative localization and target tracking based on nonlinear least squares minimization. Our method not only makes the rigorous optimization-based approach applicable online but also allows the estimator to be stable and convergent. We do so by employing a moving horizon technique to nonlinear least squares minimization and a novel design of the arrival cost function that ensures stability and convergence of the estimator. Through an extensive set of real robot experiments, we demonstrate the robustness of our method as well as the optimality of the arrival cost function. The experiments include comparisons of our method with i) an extended Kalman filter-based online-estimator and ii) an offline-estimator based on full-trajectory nonlinear least squares.