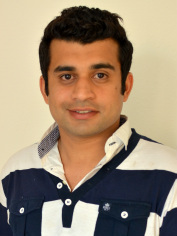 In this talk, I will present an overview of my Ph.D. research towards articulated human pose estimation from unconstrained images and videos. In the first part of the talk, I will present an approach to jointly model multi-person pose estimation and tracking in a single formulation. The approach represents body joint detections in a video by a spatiotemporal graph and solves an integer linear program to partition the graph into sub-graphs that correspond to plausible body pose trajectories for each person. I will also introduce the PoseTrack dataset and benchmark which is now the de-facto standard for multi-person pose estimation and tracking. In the second half of the talk, I will present a new method for 3D pose estimation from a monocular image through a novel 2.5D pose representation. The new 2.5D representation can be reliably estimated from an RGB image. Furthermore, it allows to exactly reconstruct the absolute 3D body pose up to a scaling factor, which can be estimated additionally if a prior of the body size is given. I will also describe a novel CNN architecture to implicitly learn the heatmaps and depth-maps for human body key-points from a single RGB image.

Biography: Umar Iqbal is a Ph.D. student at Computer Vision Research Group, University of Bonn, Germany under the supervision of Juergen Gall. He received his MS degree in Information Technology from Tampere University of Technology, Finland, in 2013 and his BS degree in Computer Engineering from COMSATS Institute of IT, Pakistan, in 2010. He worked as a computer vision research assistant at Computer Vision Group, COMSATS Institute of IT, Pakistan (2010-2011), Nokia Research Center, Finland (2011-2013), and the Tampere University of Technology, Finland (2013). He is the co-creator and organizer of the PoseTrack benchmark and challenges. His research interests include human pose estimation, activity recognition, multi-target tracking, and person re-identification.