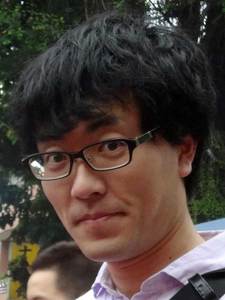 Relighting of human images has various applications in image synthesis. For relighting, we must infer albedo, shape, and illumination from a human portrait. Previous techniques rely on human faces for this inference, based on spherical harmonics (SH) lighting. However, because they often ignore light occlusion, inferred shapes are biased and relit images are unnaturally bright particularly at hollowed regions such as armpits, crotches, or garment wrinkles. This paper introduces the first attempt to infer light occlusion in the SH formulation directly. Based on supervised learning using convolutional neural networks (CNNs), we infer not only an albedo map, illumination but also a light transport map that encodes occlusion as nine SH coefficients per pixel. The main difficulty in this inference is the lack of training datasets compared to unlimited variations of human portraits. Surprisingly, geometric information including occlusion can be inferred plausibly even with a small dataset of synthesized human figures, by carefully preparing the dataset so that the CNNs can exploit the data coherency. Our method accomplishes more realistic relighting than the occlusion-ignored formulation.

Biography: Yoshihiro Kanamori received his B.S., M.S., and Ph.D. degrees in computer science from the University of Tokyo, Japan, in 2003, 2005, and 2009, respectively. He is an associate professor in the University of Tsukuba. He was a visiting researcher in ETH Zurich from 2014 to 2016 funded by the postdoctoral fellowship for research abroad of Japan Society for the Promotion of Science (JSPS). His research interests center on computer graphics, especially rendering techniques. He studies image editing techniques for reproducing real-world phenomena as well as techniques for assisting creation of illustrations and animations.