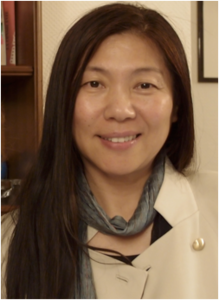 Human pose stability analysis is the key to understanding locomotion and control of body equilibrium, with numerous applications in the fields of Kinesiology, Medicine and Robotics. We propose and validate a novel approach to learn dynamics from kinematics of a human body to aid stability analysis. More specifically, we propose an end-to-end deep learning architecture to regress foot pressure from a human pose derived from video. We have collected and utilized a set of long (5min +) choreographed Taiji (Tai Chi) sequences of multiple subjects with synchronized motion capture, foot pressure and video data. The derived human pose data and corresponding foot pressure maps are used jointly in training a convolutional neural network with residual architecture, named “PressNET”. Cross validation results show promising performance of PressNet, significantly outperforming the baseline method under reasonable sensor noise ranges.

Biography: Dr. Yanxi Liu received her B.S. degree in physics/EE (Beijing, China), her Ph.D. degree in computer science on group theory applications in robotics (University of Massachusetts, Amherst, US), and her postdoctoral training in the robotics lab of LIFIA/IMAG (Grenoble, France). With an NSF research-education fellowship award, she spent one year at DIMACS (NSF center for DIscrete MAthematics and Theoretical Computer Science). Dr. Liu spent ten years as a member of the faculty of the Robotics Institute of CMU before joining the School of Electrical Engineering and Computer Science at Penn State University. She is now a full professor, a co-director of the lab for perception, action and cognition (LPAC), and the director of the Human Motion Lab of Taiji (Tai Chi) for Health Research. A central theme of Dr. Liu's research is “computational regularity” with a diverse set of applications. In the past few years, Dr. Liu has led the “Symmetry group-based regularity perception in human and computer vision” project as the PI of a prestigious NSF CREATIV/INSPIRE grant awarding fundamental creativity and multidisciplinary research. She has been a visiting professor to Stanford University (2013-2014) and ETH (2016-2017). Her industrial collaborations with Microsoft and Google resulted in two granted patents on computational symmetry. More recently, Dr. Liu has served as a program chair for CVPR 2017 and program chair for WACV 2019, the organizer and the co-chair for ICCV 2017 Computational Challenge on: Detecting Symmetry from Wild, and an associate editor for IEEE Transaction of Pattern Analysis and Machine Intelligence (PAMI).